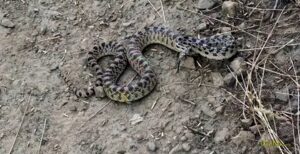 I was running along the trail the other day when a large snake suddenly coiled, hissed, and shook its tail at me. I jumped clear as fast as I could, then paused and took a closer look.

I’ve nearly stepped on rattlers before – and would have trampled at least one if I had been listening to music and not heard the rattle alarm.

This time, however, I was in no danger whatsoever. I first noticed that the tip of the tail – though it was shaking back and forth exactly as a pit viper would – had no rattles. I observed the round, black eyes so wholly unlike a rattler’s cat eyes, and the narrow head, unlike a diamondback’s triangular shape.

What I had nearly stepped on was a bull or gopher snake doing its best to convince me that it had a gland full of deadly venom stored in its mouth.

Gopher snakes are good. They eat mice, for one thing – those pesky, filthy, disease-ridden creatures that even park rangers (who love all animals!) trap and kill them to keep them from infecting everything. They also keep rattle snakes away if only to avoid competing for the same food sources.

Then again, rattlers are also good, for pretty much the same reason. They’re not aggressive like East Coast cottonmouths, so count your blessings! Give them a wide berth and they’ll probably leave you alone.

If you ever do get bit by a rattle snake, DO NOT:

If things haven’t started swelling by the time you reach the hospital, then you probably only got a “dry” warning bite without venom, but you still need antibiotics or a tetanus booster because snake mouths are filthy.

There are no featured photos (yet)